A Black Lives Matter leader is threatening an “uprising” over mandatory vaccinations and vaccine passports in New York.

New York City’s vaccine mandate began on Sept. 13. It requires proof of vaccination entry to certain public spaces, including gyms, restaurants, and bars, unless a person has an approved medical exemption.

Hawk Newsome, the co-founder and chairman of Black Lives Matter of Greater New York (BLMGNY), argues the mandates are fundamentally racist, given the low rate of vaccination in the black community.

Some 85.6 percent of black people in the state of New York remain without one dose of the COVID-19 vaccine, according to state data.

“I think, in a perfect world, [vaccine requirements] should be business by business. But it could be a slippery slope, so the mandate should be removed completely,” Newsome told the Washington Examiner.

“It’s not gonna be white men in suits on Wall Street who are gonna get stopped. There’s such hypocrisy in this thing.”

Black Lives Matter is now demanding payback for its support of Joe Biden and Kamala Harris in the 2020 presidential election, stating that “getting Trump out of office was not the end all, be all,” and that “We want something for our vote.” https://t.co/Au1g4XjBXe

The Examiner points out some 70 percent of black people in New York City aged 18 to 44 have not received the injection. There is a variety of reasons claimed for the lag in shots, including religious beliefs and distrust of government.

“It’s black people who have a natural distrust of the vaccine,” Newsome said. He cited the Tuskegee Syphilis Study as an example of historic distrust by black people of the U.S. medical community, despite the fact vaccines are accessible to people of all racial groups.

BLMGNY is advocating for the complete abolition of vaccine requirements, not only in the city but also on a national level.

Newsome, a Baptist, told the news outlet he is especially worried the vaccine mandates do not allow for religious exemptions.

“How dare they remove religious exemptions? It’s the most disrespectful thing I’ve ever seen,” Newsome said. “Now the government has decided your God doesn’t matter? I love God.” 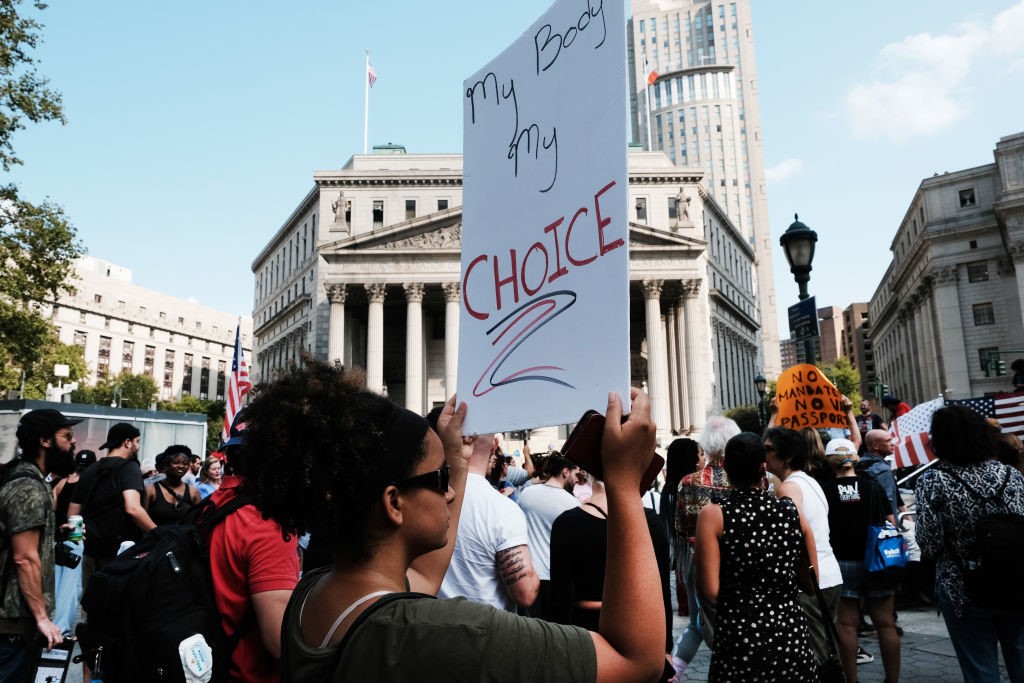 People participate in a rally and march against COVID-19 mandates on September 13, 2021 in New York City. (Spencer Platt/Getty Images)

Chivona Newsome, a fellow co-founder of BLMGNY, threatened an “uprising” in the wake of the mandates.

“We’re putting this city on notice that your mandate will not be another racist social distance practice,” she declared at a protest on Monday, according to the Examiner report “Black people are not going to stand by, or you will see another uprising. And that is not a threat. That is a promise.”

“The vaccination passport is not a free passport to racism,” she concluded.

The pushback against vaccination requirements is not limited to the general NYC area.

As Breitbart News reported, a wider spectrum of black voters is driving down President Joe Biden’s approval rating after the administration mandated vaccines for medium and large businesses on September 8.

Biden’s net approval rating among unvaccinated Black voters has plummeted 17 points since before the rollout of the COVID-19 vaccine mandates. https://t.co/WFvY33VBwA pic.twitter.com/5t8qjnlmoM

The poll additionally indicates support for Biden’s handing of the coronavirus crisis has dropped nine points to 61 percent since the end of August.