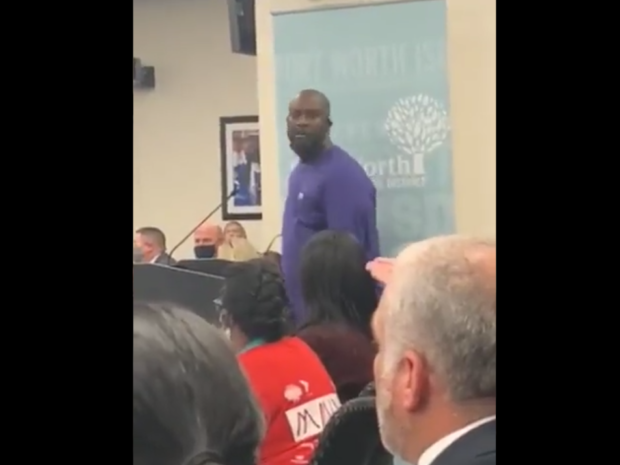 A pro-Critical Race Theory parent told attendees at a Texas school board meeting that he has 1,000 soldiers “locked and loaded” for those who “dare” question the need for race-based curricula.

Malikk Austin turned to address parents who had expressed their discontent over Critical Race Theory (CRT) pedagogy being taught in the Fort Worth Independent School District (FWISD) during the public comment portion of the meeting, according to video footage of the incident.

“For those who got an issue with this critical race theory, equity it’s something I fought for my children,” Austin said to meeting attendees. “How dare you come out from here and talk about the things that my daddy and my grandparents went through, the lynching, the oppression, Jim Crow. My kids are still being afflicted by this. How dare you come off in here and challenge me on critical race theory.”

CRT holds that America is fundamentally racist, yet it teaches people to view every social interaction and person in terms of race. Its adherents pursue “antiracism” through the end of merit, objective truth and the adoption of race-based policies.

“Look at the word racism, this is something deliberately done to people of African descent to shackle us down, this hate, fear mongering ain’t gonna work no more,” Austin added. “It’s over with, we are not our ancestors. I got over 1,000 soldiers ready to go.”

“We’re not the board,” said one parent, which Fox News identified as Hollie Plemmons, a stay-at-home mother of three. “Y’all are supposed to be taking care of us.”

A Far-Left activist in an FWISD Board meeting threatened parents all because they were criticizing CRT. The activist said that he would bring 1000 soldiers and that he will be “lock and loaded” next time. pic.twitter.com/VmqNaQQh10

Onlookers and attendees continued to engage with Austin, when a school board member repeated “One and done.” Austin was then escorted out by officers while he shouted “I’ll bring my soldiers with me next time … locked and loaded.”

The Fort Worth Independent School District did not immediately respond to the Daily Caller News Foundation’s request for comment.