MACARTHUR: Critical Race Theory, A Sickness That Cannot Be Allowed To Continue

MACARTHUR: Critical Race Theory, A Sickness That Cannot Be Allowed To Continue 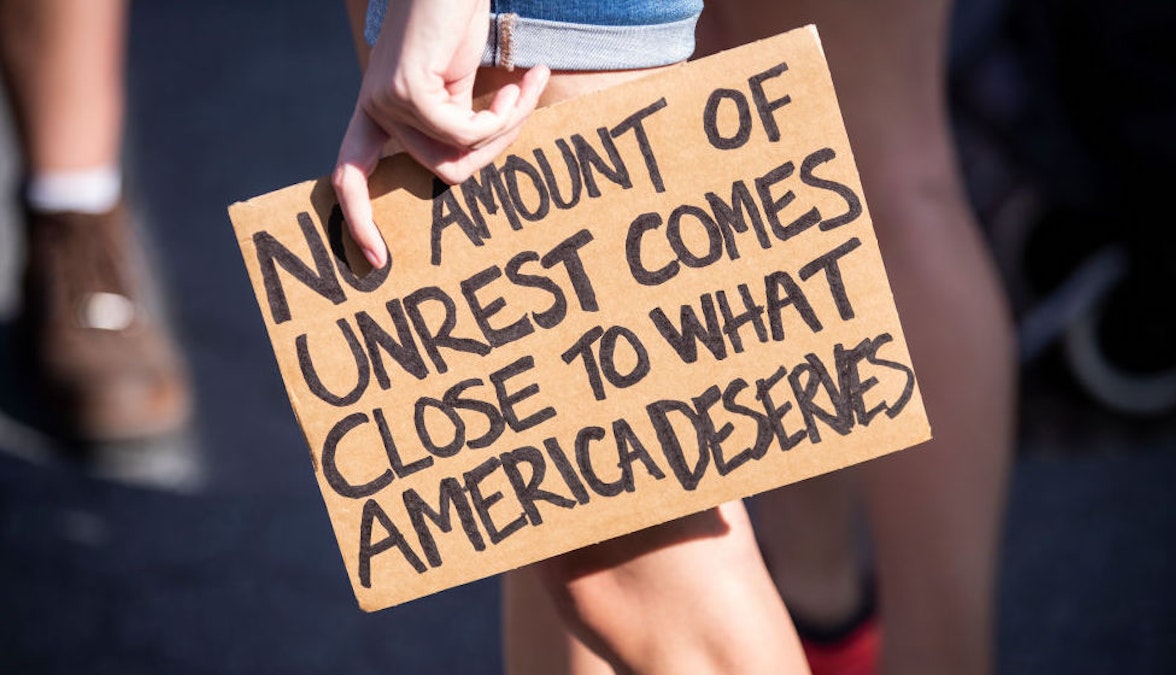 Last Friday President Trump stood up to the race hustlers and issued an order to “cease and desist from using taxpayer dollars” for the dissemination of Critical Race Theory (CRT) via mandatory instructional courses for government workers, including the military. The order directs federal agencies to begin the process of identifying and eliminating “all contracts or other agency spending related to any training on ‘critical race theory,’ ‘white privilege,’ or any other training or propaganda effort that teaches or suggests either (1) that the United States is an inherently racist or evil country or (2) that any race or ethnicity is inherently racist or evil.”

A tweet from the President called CRT “a sickness that cannot be allowed to continue.”

Trump Orders Purge of ‘Critical Race Theory‘ from Federal Agencies https://t.co/ygXcTXRHsQ via @BreitbartNews This is a sickness that cannot be allowed to continue. Please report any sightings so we can quickly extinguish!

CRT catechesis has been a routine requirement for all U.S. government employees since 2011, when Barack Obama issued an executive order for federal agencies to provide regular, compulsory training “to promote diversity and inclusion.” That may sound like a prescription for some innocuous courses in common courtesy, but in practice, this on-the-job training for government workers has featured a style of highly politicized indoctrination that closely resembles Chinese Communist “struggle sessions.”

The President’s order halting the practice came in a memo from Russell Vought, Director of the Office of Management and Budget. The memo refers to CRT as “divisive, false, and demeaning propaganda [that] should have no place in the Federal government.”

It’s a bold statement, contradicting the current canons of political correctness, but the memo’s characterization of CRT—and Mr. Trump’s tweet—are both dead-on accurate and easy to substantiate. The tenets of CRT are the ideological kerosene fueling the destructive violence that has plagued American cities all summer.

We all acknowledge that racism exists and that it is a manifestation of the sin of partiality which the Bible directly condemns (James 2:9). The racism of CRT is very different. In case you are not familiar with CRT, it is the vicious, pernicious, and virulent brand of identity politics that results when neo-Marxist social philosophy is blended with postmodern theory. The CRT credo includes the following poisonous doctrines:

That is by no means an exhaustive list of CRT dogmas, but those are enough to explain why after nearly a decade of relentless indoctrination in this system, the result has been an explosion of ethnic animosity and civic unrest. This is a worldview that deliberately foments and feeds on resentment, strife, hatred, and division.

CRT is, as our President says, a sickness. It is a ruthlessly cynical, divisive, pessimistic, misanthropic, sociological cancer. It is the greatest danger our nation currently faces, but no national leader has stood up to halt its spread until now.

In short, the doctrines of CRT are dangerous to society’s wellbeing. But more, they are unsound and unbiblical — and utterly incompatible with authentic Christianity. CRT diverts attention from the real problem with the human race: all are sinful and under divine judgment. It removes the centrality of Christ and the cross. It turns the hearts and minds of Christians from things above to things on this earth. It obscures the promise of forgiveness for hopeless sinners by telling people they are hapless victims of other people’s misdeeds. It is devoid of love.

Christians are the last people who should ever become offended, resentful, envious, or unforgiving. Love “does not take into account a wrong suffered” (1 Corinthians 13:5). The mark of a Christian is turning the other cheek, loving our enemies, praying for those who mistreat us. Christ is the example whose steps we are to follow: “While being reviled, He did not revile in return; while suffering, He uttered no threats, but kept entrusting Himself to Him who judges righteously” (1 Peter 2:23).

Such qualities, frankly, directly contradict the core principles of CRT.

In spite of all that, over the past few years, CRT has aggressively made itself at home in the evangelical community. How, you might ask, is that possible? Don’t they have more discernment than Trump?

The besetting sin of pragmatic, style-conscious evangelicals has always been that they shamelessly borrow fads and talking points from the unbelieving world. Today’s evangelicals evidently don’t believe “the wisdom of this world is foolishness before God” (1 Corinthians 3:19). Virtually any theory, ideology, or amusement that captures the fancy of secular pop culture will be adopted, slightly adapted, perhaps cloaked in spiritual-sounding language, propped up with specious proof texts, and peddled as an issue that is vital for evangelicals to embrace — because, after all, we don’t want to be perceived as totally irrelevant.

That’s precisely how evangelicals in the mid-twentieth century became obsessed for several decades with positive thinking, self-esteem, and psychotherapeutic methodologies. After that, it was marketing savvy and promotional strategies. By the beginning of the twenty-first century it was postmodernism, repackaged and aggressively promoting itself as the Emerging Church Movement.

Today, critical race theory, feminism, “toxic masculinity,” intersectional theory, LGBT advocacy, progressive immigration policies, animal rights, and other left-wing political causes are all actively vying for evangelical acceptance under the rubric of “social justice.” Evangelical leaders are beginning to employ the same rhetoric and rationale of victimhood vs. oppression that is relentlessly employed by secularists who advocate for all kinds of deviant lifestyles and ideologies. It is a worse form of “worldliness” than Christians in earlier generations ever contemplated.

Key leaders throughout the evangelical movement have begun preaching doctrines and using rhetoric borrowed directly from the catalogues of CRT literature. Some of the largest Christian conferences of the past half-decade have been narrowly focused on race and social justice, and the message being sent is heavily influenced by the ideology of CRT. Viewpoints and vocabulary like “white privilege” and “systemic racism” have literally been added to the liturgy or adopted as articles of faith in some evangelical organizations. Some even subject their Christian employees to CRT-inspired training seminars exactly like the ones correctly labeled “divisive, false, and demeaning” by the White House.

James Lindsay is an author and mathematics scholar who gained fame by helping expose the fraudulent nature of “grievance studies.” He is an atheist who describes himself as politically liberal. But he is also an articulate critic of countless absurdities and falsehoods that emerge out of postmodern theory. Speaking to evangelicals in particular, he warns that CRT is a Trojan horse,smuggling ideas into the movement that will undermine and eventually eliminate core biblical values and doctrines. He is absolutely right about that.

So how do James Lindsay and President Trump have the clarity and courage to expose CRT for what it is, while so many pastors and church leaders continue to dabble in such a destructive and obviously divisive worldview? This is one of those instances where “the children of this world are in their generation wiser than the children of light” (Luke 16:8). Though Christians are often pictured as sheep in Scripture, we are not supposed to cultivate the artless dim-wittedness that is characteristic of such animals. Rather, Jesus said, “Be shrewd as serpents” (Matthew 10:16).

Never has the church of Jesus Christ been more desperately in need of bold, courageous, clear-thinking, forthright, steadfast biblical leadership. As refreshing as it is to see a shift at the government level away from the deliberate dissemination of CRT propaganda, this urgently needs to happen in the church too.

There are too many hirelings in the place of shepherds. Our Lord knew this was to be a reality and addressed it directly: “He who is a hired hand, and not a shepherd, who is not the owner of the sheep, sees the wolf coming, and leaves the sheep and flees, and the wolf snatches them and scatters them. He flees because he is a hired hand and is not concerned about the sheep” (John 10:12-13). Evangelicals are opening the door for hirelings. The prophet Jeremiah warned long ago:

Therefore thus says the Lord God of Israel concerning the shepherds who are tending My people: “You have scattered My flock and driven them away, and have not attended to them; behold, I am about to attend to you for the evil of your deeds,” declares the Lord. “Then I Myself will gather the remnant of My flock out of all the countries where I have driven them and bring them back to their pasture, and they will be fruitful and multiply. I will also raise up shepherds over them and they will tend them; and they will not be afraid any longer, nor be terrified, nor will any be missing,” declares the Lord. (Jeremiah 23:2-4)

The promise from the Great Shepherd is to replace the false shepherds with faithful shepherds and hold fast to His sheep.

I’m grateful for the President’s courage in issuing this order. He will no doubt get a great deal of pushback — possibly even from those pastors and church leaders who are already too heavily invested in sociological theories that have no basis in Scripture. I pray he will stay the course — and that evangelical leaders will rethink their support for such divisive deception and return to proclaiming the true unity that is found in Christ, who already “broke down the barrier of the dividing wall” between ethnicities (Ephesians 2:14). For those who have put their trust in Him, “there is neither Jew nor Greek, there is neither slave nor free man, there is neither male nor female; for you are all one in Christ Jesus” (Galatians 3:28).

Dr. John MacArthur is the pastor of Grace Community Church in Sun Valley, California. He is the author of more than 400 books, a featured teacher with the Grace to You media ministry (gty.org), and is chancellor of The Master’s University and Seminary.

The Daily Wire is one of America’s fastest-growing conservative media companies and counter-cultural outlets for news, opinion, and entertainment. Get inside access to The Daily Wire by becoming a member.