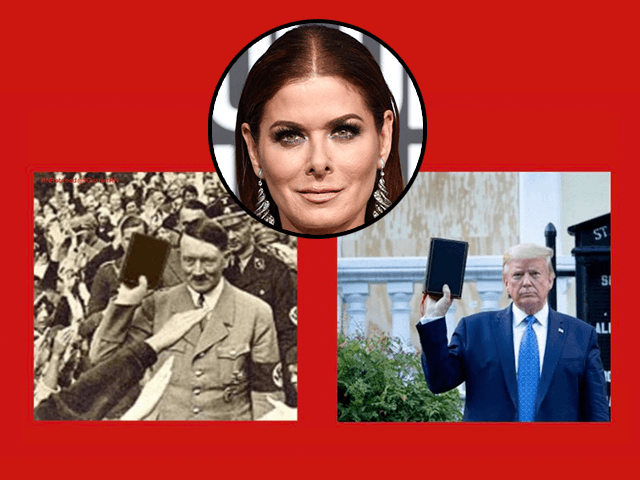 The image tweeted by Messing shows Hitler holding a bible up with right hand as he is surrounded by Nazi officers and apparent supporters and President Trump also holding a bible with his right hand in front of St. John’s Episcopal Church in Washington D.C. on Monday afternoon. “This is not an accident!” the photo reads.

The Will & Grace star captioned the tweet: “A dog whistle to white nationalists and Nazis.”

A dog whistle to white nationalists and Nazis. pic.twitter.com/FXnOGlkwjc

BuzzFeed reporter Craig Silverman called out Messing for spreading the fake image, tweeting directly at her: “Please check stuff before you spread it. The Hitler photo is fake.”

“A lot of people are sharing an image that appears to show Trump and Hitler holding a bible in the same way. The Trump pic is from June 1, but the Hitler pic was photoshopped to add the bible,” he added.

Please check stuff before you spread it. The Hitler photo is fake. https://t.co/hVLlQiSO4q

Thus far, Twitter has yet to fact check Messings’ false tweet in the wake of opting to fact check President Donald Trump’s tweet about the connection between vote-by-mail and voter fraud. Shortly after, the social media giant was forced to correct its fact-check after it was itself fact-checked.