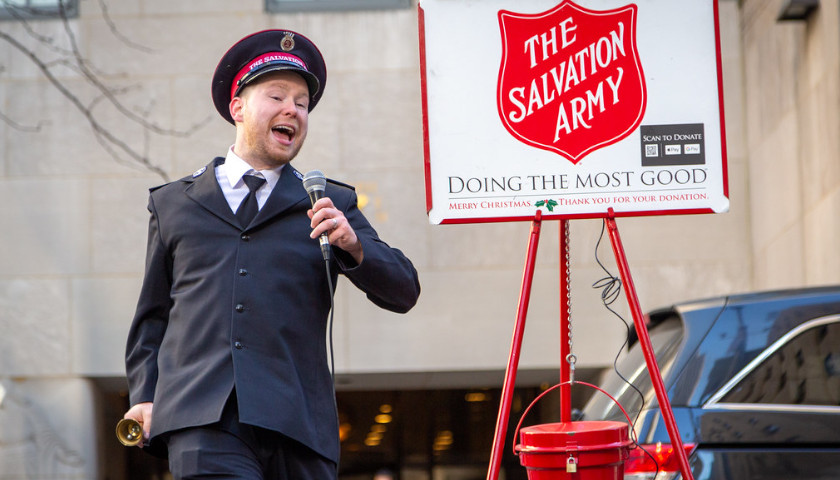 The Salvation Army wants its white donors to give it more than just money this Christmas season. Its leadership is also demanding they apologize for being racist.

It’s part of a push by the Christian charitable organization to embrace the ideas of Black Lives Matter, an activist group working to, among other things, “dismantle white privilege” and “disrupt the Western-prescribed nuclear family structure.”

The Salvation Army’s Alexandria-based leadership has created an “International Social Justice Commission” which has developed and released a “resource” to educate its white donors, volunteers and employees called Let’s Talk about Racism. It asserts Christianity is institutionally racist, calling for white Christians to repent and offer “a sincere apology” to blacks for being “antagonistic.. to black people or the culture, values and interests of the black community.”

“Many have come to believe that we live in a post-racial society, but racism is very real for our brothers and sisters who are refused jobs and housing, denied basic rights and brutalized and oppressed simply because of the color of their skin,” one lesson explains. “There is an urgent need for Christians to evaluate racist attitudes and practices in light of our faith, and to live faithfully in today’s world.”

In an accompanying Study Guide on Racism, Salvation Army authors explain that all whites are racist, even if they don’t realize it.

“The subtle nature of racism is such that people who are not consciously racist easily function with the privileges, empowerment and benefits of the dominant ethnicity, thus unintentionally perpetuating injustice,” it says.

“Sunday school curriculum that only uses white photography and imagery” is an example given that perpetuates injustice.

“We must stop denying the existence of individual and systemic/ institutional racism. They exist, and are still at work to keep White Americans in power,” the lesson says.

“These systems give privileges to white people”

DiAngelo and Rogers (Kendi) claim that any observable difference in relative behavior or accomplishment between racial groups is due to the inherent racism of whites, arguing against the traditional American concept of equal opportunity in favor of the Marxist-inspired goal of equality of outcome.

“Structural racism.. is the overarching system of racial bias across institutions and society. These systems give privileges to White people resulting in disadvantages to (blacks),” reads a Salvation Army lesson.

Proponents of “Critical Race Theory” don’t believe whites, Asians or Hispanics can avoid being prejudiced against blacks. They want them to demonstrate what they call “anti-racism” in favor of blacks, helping to establish lower standards for them than they do members of other racial groups, or making cash “reparation” payments to blacks as compensation for alleged previous racism.

“Stop trying to be ‘colorblind’. While this might sound helpful, it actually ignores the God-given differences we all possess, as well as the beautiful cultures of our Black and Brown brothers and sisters,” Let’s Talk about Racism explains. “Instead of trying to be colorblind, try seeing the beauty in our differences, and welcome them into your homes churches and workplaces. Being colorblind also ignores the discrimination our Black and Brown brothers and sisters face and does not allow us to address racism properly.”

Founded in 1865 in London, England, the Salvation Army is both a protestant Christian church and an international charitable organization. Its first “red kettle” was set up in Oakland, California in 1891.