3. Do Not Misuse God’s Name

3. Do Not Misuse God’s Name 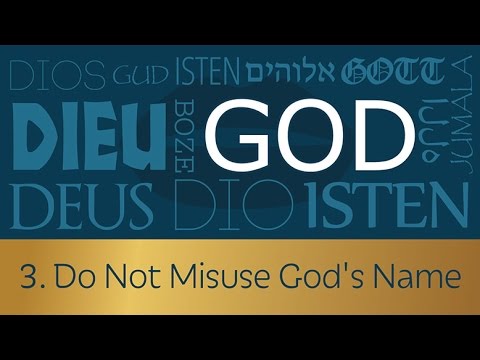 The Worst Sin You Can Commit

Not all sins are equal. Some are worse than others. The worst of one of all? Committing evil in the name of God. This commandment is often misunderstood because it's mistranslated. It's not concerned with saying God's name "in vain" like "God, did I have a terrible day at the office." It's about using God's name in the commission of evil. We see this today when Islamists invoke God's name while they murder innocent people.
Is there such a thing as "the worst sin" -- one sin that is worse than all others? Well, there is. I am well aware that some people differ. They maintain that we can't declare any sin worse than any other. "To God, a sin is a sin," is how it's often expressed. In this view, a person who steals a stapler from the office is committing as grievous a sin in God's eyes as a murderer. But most people intuitively, as well as biblically, understand that some sins are clearly worse than others. We are confident that God has at least as much common sense as we do. The God of Judaism and Christianity does not equate stealing an office item with murder.

Well, as it happens, the commandment is not the problem. The problem is the translation. The Hebrew original doesn't say "Do not take;" it says "Do not carry." The Hebrew literally reads, "Do not carry the name of the Lord thy God in vain." One of the most widely used new translations of the Bible, the New International Version, or NIV, uses the word "misuse" rather than the word "take:" "You shall not misuse the name of the Lord your God." This is much closer to the original's intent.

For the complete script, visit https://www.prageru.com/videos/do-not-misuse-gods-name